The series Cross-Roads offers a platform that welcomes publications of the most outstanding Polish and non-Polish scholars dealing with culture, literary theory and history developed on the cross roads between the East and the West. We invite academic works (essay collections, monographs and as well as volume-length texts) on a wide range of topics, including historical and recent developments in literary and cultural studies. As the title "cross roads" indicates, we wish this series to be a meeting point for a variety of academic approaches relating both to literary theory and history as well as cultural and anthropological studies, challenging the complexity of both contemporary and historical empirical research undertakings. This is why we encourage diverse, interdisciplinary, comparative and multi-faceted takes that may put a new light on theoretical analyses as well as on pragmatic discussions, enabling new ways of interpreting the particular historical legacy situated and rooted on the cross-roads between the West and the East of Europe.

More about the series on the publisher's site. 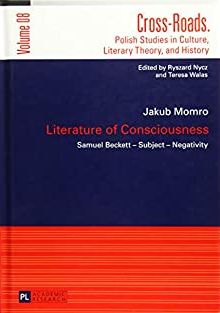 The questions the writer Samuel Beckett posed in his dramas, his prose and his poetry are the central questions asked by the most outstanding thinkers of modernity. Samuel Beckett, therefore, is the central figure in this book, but he is not alone. This study is not only a precise literary analysis, but it also traces transformations in terms of subjectivity and tries to conceptualize them. It universalizes the issues that emerge from the friction between the consciousness and the world, or, in other words, from the history of the struggle between the modern subject and that which negates: death, nothingness, the absence of meaning and the deception of living.

More about the book on the publisher's site. 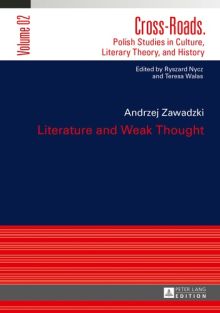 This book is a reconstruction and presentation of the fundamental assumptions of the so-called weak thought, as elaborated mainly by the Italian hermeneutical philosopher Gianni Vattimo and the Romanian philosopher Constantin Noica in his ontology. Both Noica and Vattimo focus on all that is existentially fragile, deficient, crippled or defective. The way in which weak being manifests itself can be best expressed by using the concept of the trace. Some motifs of weak thought serve to reinterpret certain fundamental concepts of poetics, firstly, the concept of mimesis, treated here as a kind of tracing, and secondly, the concept of the textual subject as a trace. The book also describes these tendencies in modern literature in which the intuition of weak being has most fully expressed itself. In general terms, this intuition is that of a reality that has lost its substantiality and essentiality. This intuition is most frequently expressed by the motif of the trace in its various different meanings: as the imprint, the remnant, the sign-message.

More about the book on the publisher's site.